On November 16th, Chris Stapleton concluded his tour in style at the El Rey Theatre in Los Angeles, CA. Typically an unlikely place for the Kentucky born country singer but not as of late. After Chris won three CMAs and “wowed” the audience with his performance with Justin Timberlake, the final tour stop sold out. The El Rey is a small theatre with a capacity of 771. Now that he has caught the attention of every country music fan his next tour may not be in small venues, which adds to a truly special night.
I had high hopes for this concert as far as the sound. I hadn’t seen Chris Stapleton perform live and I love the sound of “Traveller”, but I wasn’t sure if it would translate well in a live setting. I guess maybe I just didn’t want to be disappointed…but I wasn’t. In fact, Chris and the band sounded even better than I could have hoped.
This huge, profound wall of sound gushed from the stage through the entire theatre. The richness of Chris Stapleton’s voice and the tightness of his band stayed true to the record, and any vocal deviations from the album were simply amazing. Although the overall sound of his songs are a mix of country, southern rock, blue grass and blues, the band didn’t need to have umpteen players on the stage and sounded incredible.
Chris and the band, including his wife Morgane on vocals, simply came on stage and grabbed the audience by the throat, no thrills and no filler. Talk between songs was even pretty minimal. Country music can and should be minimalistic anyway and Chris Stapleton proves that in his performance, with the exception of his thick but yet gritty voice.
The set list was almost a complete run down of “Traveller”, but also included a Tom Petty cover and a new, unreleased song called “Gypsy”.
It was a special night in LA and indeed the stars did come out. I’m sure there were other celebrities in attendance but I did see one other country music singer/actress in the audience.
If your a Chris Stapleton fan from his album like I was, then you will thoroughly enjoy seeing him live. I highly recommend it! This was one of the best shows I’ve ever seen. 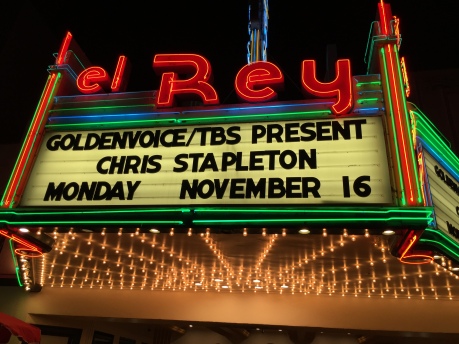